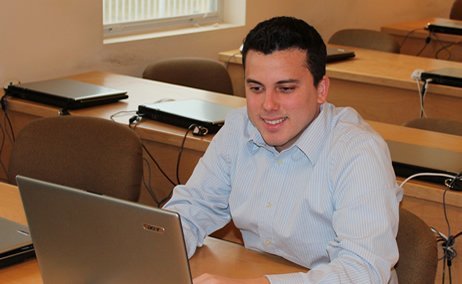 Damian Finol is no stranger to international travel. When he was a baby, his parents brought him from Maracaibo, Venezuela to the U.S., so they could pursue graduate studies. More than 25 years later, Damian has returned to the U.S. for his own graduate education in Computer Science at Maharishi University of Management.

Damian’s love of traveling has led to work with the Wikimedia Foundation, where he helps establish Wikimedia chapters on every continent to bring “free knowledge” worldwide—a major accomplishment of which he is very proud. He is one of only 8-10 international Wikimedia Chapter Committee members with this distinction. 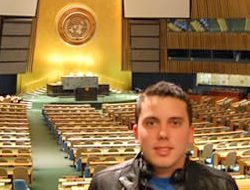 Damian Finol at the United Nations in New York.

For example, in 2006, Damian gave a presentation at Wikimania at Harvard University on the usage of Wikipedia in Native South American tribes in northwestern Venezuela. Then, in 2008, in the historic Library in Alexandria, Egypt, Damian lectured on, “Social attitudes of Latin Americans toward Spanish Wikipedia.” This 25-minute lecture can be viewed at the movie archive of the Library.

The Foundation continues to send him to different countries to establish chapters for preserving and disseminating free knowledge. Next month, he goes to Germany during spring break at MUM.

While studying to be an Informatics Engineer at Universidad Rafael Belloso Chacin in Maracaibo, Damian did mostly JSP/Servlets, and then switched to Unix/Linux system administration. This evolved to IT Security, where he worked for two of the biggest banks in Venezuela. He was responsible for managing the security of a big range of projects, including EMV chip technology on credit/debit cards and PCI-DSS Compliance (As required by VISA/MasterCard).

From 2008-2011, Damian taught SQL/Databases, Project Management, Systems, IT Security and Linux as an Associate Professor of Computer Science at Nueva Esparta University in Caracas.

After 5-6 years of Software Engineering, Damian decided to continue his academic preparation with a Masters degree. Several friends raved about their experiences at MUM, and after some research he decided that the curriculum (7-8 months of courses, studying one course per month full-time, followed by up to two years of paid authorized practical training in a U.S. company) was most inviting. He also liked the fact that the program fosters personal growth through the practice of the Transcendental Meditation® program.

According to Damian, “MSCS courses at MUM are incredibly up-to-date. Classes in software development, programming practices, etc., teach the latest practical skills and algorithms, so you’re ready for the current job field.”

Even though Damian is accustomed to a much warmer Venezuelan climate, the few months of cold Fairfield, Iowa weather don’t bother him. “The human warmth among students, Computer Science administrators, and the caring, experienced faculty at MUM is very comforting.”

“People on campus and in the community are very friendly to the diverse student body. There are lots of activities in the Latino clubs, and a welcoming Catholic Church nearby. After only a couple days on campus, you can start calling the university your second home,” adds Damian.

Misconceptions before arriving at MUM

“My main misconception when I heard and read about MUM was the Transcendental Meditation Movement behind it, and how it sounded like a religious movement. This of course wasn’t the case. The Transcendental Meditation technique is not related to religion in any way, and is supported by more than 600 scientific studies documenting benefits in all areas of life. It’s a technique that helps the mind like yoga helps the body. So learning about it, and experiencing what it was all about showed me that TM is a universal technique that improves precision and clarity of thinking, and creativity, which make algorithms easier to design.”

“The MUM community is very multicultural. Students come from many different backgrounds, cultures and religions: from Arabs, to Indians, Nepalese, Ethiopians, Chinese, and of course Latinos. The University has a big Christian community (Catholic, Protestant), and other religions too (Muslim, Hindu, etc.). MUM encourages students to observe religious holidays and fosters students to express their culture and religion freely. There’s no incompatibility between the Transcendental Meditation Movement and religion or culture.”

Damian thinks big, and everyone who meets him is impressed with his good nature, balanced personality, professional competence, self-confidence, and motivation for success. He would love to help create the next Google or Facebook, and is already making plans to start his own IT company. Upon completing his on-campus coursework in June, Damian plans to take an internship position near family in Seattle while enjoying a comfortable, safe and happy life.

“My advice is to go for it. Don’t be afraid to see the world and experience life. Coming to MUM has been a tremendously positive experience—one that I’m sure I’ll remember fondly for many decades. It’s a fun place to study and to grow.”

“The University isn’t just here to teach about Computer Science, but also to help you grow as a person. That’s not something that is seen in other universities. In a regular university, knowledge is taught without thinking how the body and mind process it. At MUM there’s also a focus on how development of mind and body makes that knowledge useful and more insightful. It truly is a different (and positive) way of learning.”

Watch a video about Damian and our MSCS program on YouTube.